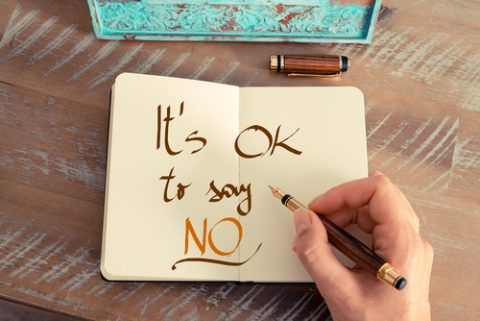 Consider “No” an Important Early Step in Retirement

by Richard Downen, MyNextSeason Advisor
A client recently told me they were having buyer’s remorse about a project they had agreed to when asked by a friend. It was shortly after retiring when a friend suggested that, since they now had plenty of time on their hands, they could help with a project at the friend’s business. My client confided in me, “Why did I say yes to that? The next morning, I already regretted it. I am less than two weeks out from having retired from work, and already I’ve lost control of my calendar.”

Throughout our careers, we are trained to say “yes” to opportunities, responsibilities, challenges, and relocations. Do what is asked of you. Get the job done and be rewarded for it. This pattern repeats itself year after year. Agreeing to requests becomes a reflexive, corporately-reinforced response.

Fast forward to now, and you have this equation:

stress arising from retirement transition “availability” + lack of clarity on “what will I do next?” + muscle memory of saying “yes” for so many years = saying “yes” prematurely to requests that come to you

Such requests you are perfectly capable of doing, but really don’t want to do. Net result: serious buyer’s remorse.

Saying “no” is a learned response—and one that is unfamiliar for seasoned executives. And when there isn’t a clear reason for saying “no,” our instinct is to simply say “yes.” This is where the remorse sets in.

As you step away from your successful career and step into a new season, it’s important to retrain yourself to be protective of your time and energy—which are both finite—even when you don’t have anything on the calendar. Saying “no” to a request maintains that optionality, which is so key—and so unfamiliar. But you can do it! So, how?